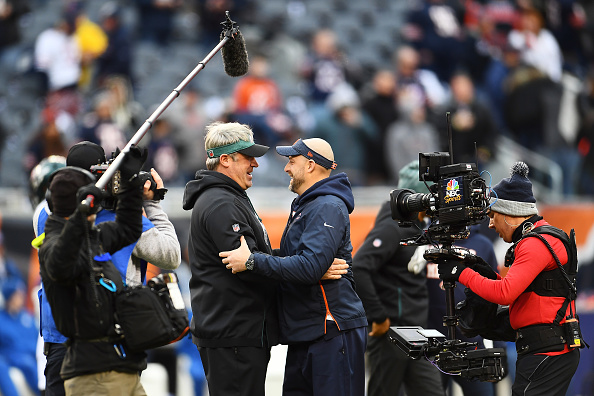 This past week, the Arizona Cardinals hired USC offensive coordinator, Kliff Kingsbury to be their head coach. Kingsbury had served as the head coach of Texas Tech for six seasons before the University decided to let his contract expire. Everyone knows that, what they might not know is that he actually played quarterback in the NFL. He was a backup for the New England Patriots, New Orleans Saints, and New York Jets in the early 00’s. What’s really interesting is that Kingsbury is far from the only head coach in the NFL to have been a backup quarterback in the Pros.

Kingsbury is the newest backup quarterback to become a head coach, and he’ll be tasked with developing Josh Rosen into a bonafide starter. His job will not be an easy one, but if he’s like the other men on this list, he’ll find a way.

While Jay Gruden didn’t play in the NFL, he did play in the AFL for over a decade. Curiously, he also coached in the other league, actually interrupting his career to lead the Orlando Predators to two ArenaBowl championships. He’s struggled in Washington, and his days may be numbered, but it’s hard to blame him when he lost his first and second string quarterbacks to broken legs.

Jason Garrett was basically born to be a Cowboy’s coach. He was Troy Aikman’s backup for the bulk of his career, and aside from one stint as the quarterbacks coach in Miami, he’s spent his entire coaching career in Dallas. He spent a few years as Dallas’ offensive coordinator until Wade Phillips was fired in 2010, and he became the interim head coach, and then dropped the interim the following off-season.

Matt Nagy is probably the NFL’s coach of the year this season, but he was also a bit of a journeyman quarterback in his day. After bouncing around the Arena Football League for a while, he ended up in Philadelphia, serving as both a backup quarterback and a coaching intern for Andy Reid. His Chicago Bears are one of the most dangerous teams in the NFL this season, and he’s worked wonders with second year quarterback, Mitch Trubisky.

Frank Reich is best known for having the biggest comebacks in college football and NFL history, but by far the most impressive comeback he’s directed has been the revival of the Indianapolis Colts. After starting 1-5 and being dead last in the power rankings, the Colts have made it to the AFC’s divisional round and pose a real threat to Patrick Mahomes and the Kansas City Chiefs.

The head coach of the defending world champion Philadelphia Eagles made his rounds in the 90’s, backing up everyone from Dan Marino to Kerry Collins to Brett Favre. Ironically, the former backup quarterback leaned on another backup quarterback, Nick Foles, to win a Super Bowl. Here in 2019, he may have to do it again as Carson Wentz is out with injuries and Nick Foles is back in charge.

With Mike McCarthy gone, the Green Bay Packers have brought in Tennessee Titans offensive coordinator, Matt LaFleur to be their next head coach. LaFleur has taken the road less travelled, as he not only played in the shortlived Champions Indoor Football league, but he had no fewer than 10 coaching jobs in college and the pros before his first head coaching gig showed up. It’ll be interesting to see if he fares better with Aaron Rodgers than McCarthy did.

This is almost a little known fact, but Sean Payton used to be a backup quarterback. He actually bounced around the Canadian Football League before getting a gig as the last quarterback standing in a year where the Bears started four different quarterbacks (Jim McMahon, Mike Tomczak, Mike Hohonsee, and Steve Bradley).

What’s really interesting is that Payton didn’t really get a chance to start in the NFL because of his size (5’11, 200 pounds), but he’s helped the career of two other smaller quarterbacks. He and Bill Parcells discovered a quarterback from Payton’s alma mater, Eastern Illinois, who was considered by many to be too small. His name was Tony Romo and he went on to become the all-time leading passer of the Dallas Cowboys.

The other guy? An “injury-prone, washed up” undersized quarterback named Drew Brees. I wonder whatever happened to him.

What’s really interesting is that so many of these coaches have competitive teams. There are eight teams left in the playoffs right now, the New England Patriots (who have stuck with their backup quarterback, Tom Brady, for almost twenty years), Kansas City Chiefs, Los Angeles Chargers, Indianapolis Colts, Los Angeles Rams, New Orleans Saints, Dallas Cowboys, and Philadelphia Eagles are all that remain.

Of those eight teams, five are coached by former quarterbacks. Anthony Lynn of the Chargers was a tailback in the 90’s, and Andy Reid has the most entertaining punt, pass, and kick competition footage of all time, as seen below.

Honestly, it makes a lot of sense. The hardest thing about becoming a head coach in the NFL is breaking into the league in the first place. You and I might think we’re great at Madden, but that doesn’t mean we can send Mark Davis a stream of us playing and coach the Raiders tomorrow. You have to break into the league, and work your way up the ranks. If you’re a former player, you’re already there. Many players make the transition to coach immediately after their playing career ends.

As for quarterbacks, who understands the game better than quarterbacks? They have to be able to read defenses to expose weaknesses, and they have to memorize the entire offense, so they have a pretty solid understanding of the game. Quarterbacks are uniquely aware of everything that happens during the offensive phase of the game.

So why don’t more starting quarterbacks become head coaches? It’s simple, career length. If you’re a franchise quarterback, you play into your late 30’s and sometimes, early 40’s. You get into the game late, and it’s that much harder to become a headcoach. Backups typically retire younger, taking small coaching jobs on the staff of their team.

Not to mention, backups have to be just as aware of what’s going on during the game as the starter does, but they have the same view as the coach. Often you’ll see backups talking to starters when they’re reviewing film on the sideline.

What’s interesting is how many of these coaches either played or coached under Andy Reid. I wonder if we’ll see another head coach emerge from Reid’s squads. Chase Daniel is the easy favorite, as he’s played under Reid, Pederson, Payton, and Nagy as a backup.

One thought on “Clipboard to Headset: Why Backup Quarterbacks Make Great Coaches”