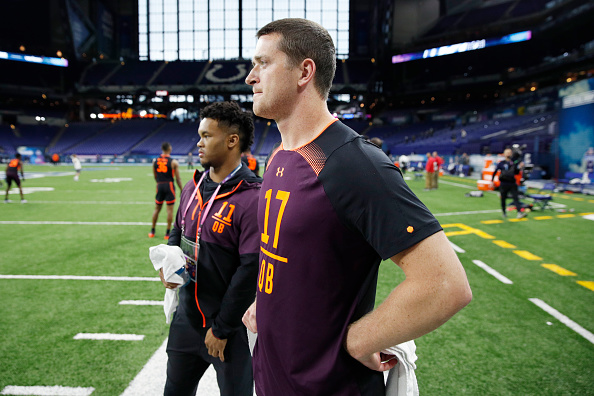 Everyone knows that quarterback is the most important position in American sports. Being the starting quarterback of the Dallas Cowboys is arguably more American than being the President of the United States. Throw in the fact that since 2000, only three Super Bowls have taken place that didn’t feature Tom Brady, Peyton Manning, or Ben Roethlisberger, and you’ll see why teams are so desperate for a franchise quarterback. So desperate, in fact, that they’d draft a mediocre one if they could convince themselves that he could be that guy. Hence, my fierce disliking for this quarterback class, in which demand inflates the value of the supply.

I Hate This Quarterback Class: A Love Story

In this piece, I’m going to take on all of the quarterbacks that could be taken in the first round of this year’s draft. I’ve watched hours of film on all four of these guys, and I’ve got a lot to say about each of them, so bare with me. In order, I’ll break down why I’m not crazy about Kyler Murray, Dwayne Haskins, Drew Lock, or Daniel Jones.

First thing’s first, I really like Kyler Murray as a football player. He’s my favorite quarterback in this class and I want to be wrong about him. I think he’s really exciting to watch, and if he were three inches taller, I’d be really excited to watch him play in the NFL. However, he’s not three inches taller, and I’m inclined to be skeptical about the height they measured at the combine (5’10). Unfortunately, that’s not where my problems with Murray end.

While his arm talent is undeniable, some of his decision making is questionable. Some of his best throws at Oklahoma this year saw him throwing with pinpoint accuracy into traffic, but some of his worst passes did as well. Time and time again, he either got his receiver killed over the middle or was intercepted by throwing some really unforgivable passes.

Secondly, I wouldn’t call his offense at Oklahoma a pro-style scheme. He ran a ton of read-option, two read plays, and he checked down so much it made Derek Carr bluff. I saw more from Trevor Lawrence against Alabama then I saw in an entire season from Murray, and make no mistake, I watched every single snap he took at Oklahoma.

The significance of his size is up for debate. Everyone I’ve argued with about Murray cites Russell Wilson and Drew Brees as reasons why his size doesn’t matter,

I’m not convinced that he loves football. Maybe it’s just Jon Gruden’s mannerisms rubbing off on me, but I want my quarterback to love football more than life itself. Tom Brady is 400 years old, is married to a super model, has won six Super Bowls, and is worth roughly $180 million, but he’s still an insanely competitive crazy person with a chip on his shoulder. I want that. I want Peyton Manning telling Bill Polian that he’ll kick his ass for 15 years if his Indianapolis Colts select Ryan Leaf instead. I want someone that was born to play quarterback, and refuses to do anything else.

I’m not convinced that’s Kyler Murray. This is a personal issue, and something you shouldn’t take too seriously because I don’t know Kyler. But what I do know is that first round picks get guaranteed big bucks a lot faster in the NFL than they do in professional baseball, and I wasn’t blown away by any of his interviews, especially this diaper he dropped on the Dan Patrick Show.

For what it’s worth, I think Dwayne Haskins is probably the safest pick at the position this season. He’s got the ideal size, a great arm, and put up monster numbers at Ohio State this year. Haskins has the kind of arm where you could dial up just about any throw and he’ll effortlessly pull it off. I don’t hesitate to compare this guy to Ben Roethlisberger as a prospect.

However, having the highest floor in a low quality draft class isn’t something to write home to mom about. Just because I think Haskins can be good, that doesn’t mean I think he will be. He only started for one season at Ohio State, a school with NFL talent that has a history of producing underwhelming quarterbacks. That shouldn’t be held against him, by any means, but I haven’t forgotten about the Terrelle Pryor hype.

Here’s what I don’t like about Haskins. He’s not a great athlete (despite what some talking head on TV might say to justify making ten million dollars a year), and he has no pocket awareness. That means that when teams get pressure on him, bad things will happen. We’ve already seen it, with a staggering six fumbles in his collegiate career.

Also, he’s got a great arm, but that doesn’t mean he’s the best deep thrower. In college, great receivers get so much separation that they can bail the occasional underthrowing quarterback out, but in the pros, that won’t fly. If your biggest attribute is your deep ball, you can’t have these issues.

These are all things that can be fixed, but there’s no way Dwayne Haskins falls out of the first round, so you have to hope he’s receptive to coaching. Again, this sounds harsh, but if you’re going to be a top ten pick, you need to explode onto the scene and make a huge impact. I compared him to Ben Roethlisberger, but that’s an optimistic take. Describe a big, strong-armed quarterback from a big football school that just needs a little coaching to a fan of the Oakland Raiders and see what a skeptical take looks like.

I’m going to tell you right now, I’ll be shocked if Drew Lock isn’t a Denver Bronco after Thursday night. This kid is the quintessential John Elway quarterback project. He’s big, he’s athletic, he’s got a great arm, and all he needs is a little work. Tell me that doesn’t describe every quarterback John Elway has brought to Denver that isn’t named Peyton Manning. He’s a little shorter than Brock Osweiler, Paxton Lynch, and Joe Flacco, but he’s got some size on Case Keenum.

He’s the most frustrating quarterback to watch in this draft. Some of his throws are so good, you have to watch them over and over again to make sure it really happened, while others are so bad, you have to shut down your computer. He’s wildly inconsistent, his passes sail when he can’t set his feet, and his footwork is raw like Monday nights.

He’s been compared to Patrick Mahomes, but I really just think that’s because he’s such an unconventional prospect. He buckles under pressure, he struggled mightily against quality competition, and he might be my least favorite prospect in a draft class full of guys I’m dislike so much I wrote an article about it.

All jokes aside, Lock’s athleticism is what’s going to get him selected in the first round of this year’s draft. He’s 6’4, 230 pounds, he runs a 4.6 40, and he can make all the throws. If we were just going off of the film alone, I think he ends up being a day two, or maybe even day three prospect. I’d much rather have Murray and his vertical challenges or statue Haskins over Lock.

I had fun at the expense of John Elway and the Denver Broncos, but if Drew Luck is the perfect Broncos bust, Daniel Jones is already an Oakland Raider. I’m hoping the team sticks with Derek Carr for at least one more year, but Daniel Jones checks all of Jon Gruden’s boxes.

Firstly, he just looks like a quarterback. He’s got a serious case of quarterback face, he’s 6’5, 220 pounds, and while he’s not as fast as Lock or Murray, he’s quick enough to make plays with his legs. Throw in the fact that he played under Dave Cutcliffe, the head coach at Duke, who coached both of the Manning brothers in college and remains a close family friend to this day.

To most sane people, that might read as “oh, okay, this guy is a quarterback guru, he can get the most out of everyone” and that would be the end of it. However, Jon Gruden is not most sane people, to him, that reads, “finally, I can draft Peyton Manning.”

That’s not to say that Daniel Jones can’t be good in the NFL. There are some things he does really well. Duke isn’t known for football, so it’s not like Jones was playing with all-world talent on offense, but he still managed to have adequate production, is technically sound, and at least from what I saw, seems to have a very high football IQ.

Having said that, I was amused by how many flaws that Jones and Carr share. Jones has the nasty habit of throwing off his back foot, which causes passes to sail or lose velocity, he throws some iffy 50/50 balls, and frankly, he doesn’t know when to give up on a play and just throw the ball away. Unlike Carr, he doesn’t have a remarkably impressive arm, and he never seemed to take over games in college.

I just don’t see Jones as a bonafide starter in the NFL. To me, his ceiling is Ryan Tannehill, and unless you’re the Miami Dolphins, you don’t spend a first round pick on Ryan Tannehill. Jones could do really well in a system like New Orleans or Philadelphia, where a QB guru could get the most out of him like Cutcliffe did in college.

This article was half-satire, half-analysis, and if I’ve insulted one of your favorite quarterback prospects, I’ve got some good news. Absolutely nobody knows which quarterbacks will or won’t be great in the NFL. Not me, some schlubb on the internet, or the people who actually make the picks on draft day have any idea what collegiate prospects are going to play well in the pros. Jamarcus Russell, Jeff George, and Sam Bradford were all first overall picks, meanwhile Tom Brady was barely drafted.

Statistically speaking, at least one of these guys will be a pretty solid NFL quarterback. Over the last ten drafts, only two classes (2010 and 2013) failed to produce a quarterback that has a starter somewhere in the NFL. And if that’s not enough, I was lukewarm on Patrick Mahomes coming out of college, and that’s putting it lightly.

All that matters to me is that the Raiders don’t use a first round pick on any of these guys. Save that for Trevor Lawrence in 2021, okay, Chucky?

2 thoughts on “I Hate This Quarterback Class: A Love Story”