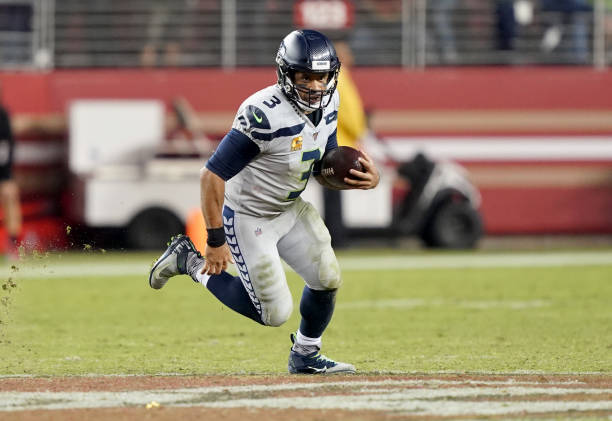 Like many fans of American football, I stayed up way too late last night watching the Seattle Seahawks snap San Francisco’s undefeated season in an overtime thriller. The thing that really stuck out to me is just how good Russell Wilson is. Sure, he had an iffy interception in overtime, but even then, the read was right, the throw just floated. The Seahawks knocked off San Fran, and are just barely trailing the 49ers as we enter the final stretch of the season. Here’s why I think the Seattle Seahawks will win the NFC West (as I predicted weeks ago), and Russell Wilson should win the NFL’s most prestigious award for an individual, the Most Valuable Player award.

Russell Wilson Should Be the Runaway MVP

That’s not really a hot take. They’re 8-2, and even though the remaining schedule isn’t a cakewalk, they don’t play a team that’s necessarily better than them. I wouldn’t be the least bit surprised if the Seahawks ran the table, ending the season at 14-2. But even at 8-2, they’re still trailing San Francisco, a team they just beat, in the NFC West title race.

Well, that’s where it gets fun. Because to this point, the 49ers have had it pretty easy. Before their game against Seattle, San Francisco’s opponents were a combined 24-47-1. That’s an average record of 3-6. Moving forward? Not so much. Their next seven opponents are a combined 40-25-1. That means an average record of 6-4, almost the inverse of what they faced during the first half of the season. That includes trips to the 7-2 Baltimore Ravens, 7-2 New Orleans Saints, and the 8-2 Seattle Seahawks, as well as a home game against the 8-2 Green Bay Packers.

You do have to be a leader on a playoff team to be eligible for MVP, but make no mistake, it is still a statistics-based award. Nine of the last ten MVPs have been quarterbacks, and all of them have put up pretty crazy numbers. Averaged together, the last nine MVPs have put up 4,747 all-purpose yards, 38 total touchdowns, and averaged fewer than eight interceptions during their season.

Currently, Russell Wilson has thrown for 2,738 yards, 23 touchdowns, and only two interceptions, all while rushing for 256 yards and three scores. That means he’s on pace to put up 4,791 all-purpose yards, 42 total touchdowns, while only throwing three interceptions.

His stiffest competition, Baltimore’s Lamar Jackson, even with an iconic rushing season, isn’t quite as good. Lamar’s on pace for 4,868 yards, 38 touchdowns, and nine interceptions. Baltimore has an iffy schedule moving forward, so I wouldn’t be surprised if those numbers took a big hit.

Russell Wilson is, has been, and will continue to be, an elite quarterback. Since 2015, no quarterback in the NFL has thrown for more touchdowns than Russell Wilson. In fact, since he entered the NFL in 2012, only Tom Brady, the most successful quarterback in NFL history, has registered more wins as a starter. Despite his success, credit has always been distributed elsewhere.

First, it was Seattle’s legendary Legion of Doom secondary. Primarily, the trio of Richard Sherman, Earl Thomas, and Kam Chancellor headlined an elite defense that made them contenders. Then, it was Marshawn Lynch, Beast Mode, the most punishing tailback in recent memory. Recently, it was, no joke, Bobby Wagner, the team’s starting inside linebacker.

So despite the fact that the offense has rarely had marquee targets, the offensive line has struggled mightily, and a difficulty establishing a reliable run-game in a post-Lynch world, Wilson has always been someone the Seahawks won with, not because of.

People swear up and down that the MVP is a single-season trophy, not a career award, but it isn’t the case. How many times did they give the damn award to Peyton Manning just because he’s Peyton Manning? The same could be said for Aaron Rodgers.

Year in and year out, Russell Wilson has been one of the NFL’s best quarterbacks, and here in 2019, nothing has changed. Despite the fact that he’s running an offense with a rookie that can run two routes, a receiver that literally every other team in the NFL passed up on, and an undrafted tailback, he’s got Seattle firmly entrenched at the top of the NFC’s playoff picture.

Give this man the MVP. Anything else would be uncivilized.

One thought on “Russell Wilson Should Be the Runaway MVP”