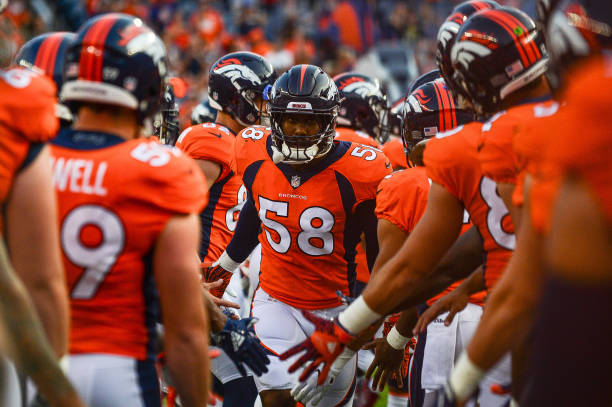 So I did one of these for the Raiders, and it got me thinking. Why not do picks? Why not do way-too-early week one predictions? I got started, and before ya knew it, I had a spreadsheet with all 32 schedules marked out. I started coding the teams green and red for wins and losses, and I realized it would be significantly easier to just publish a schedule prediction for each of the 32 NFL teams.

Week One: vs. Tennessee Titans

So here’s something, I’m not a huge fan of the Tennessee Titans this year. I think they were a team that got hot at the right time and tricked some teams into overlooking them. Even as the Titans began to run up the score against the Ravens, I never really thought Lamar Jackson and company would lose.

At home, fresh and ready, I think Drew Lock’s revamped offense puts up some points on Mike Vrabel’s defense and the defense exposes Ryan Tannehill.

I think the Pittsburgh Steelers are back. Maybe not to what they were with the Killer B’s, but at least back to better than 2019. Ben Roethlisberger is healthy, there aren’t many distractions (unless Hard Knocks comes to town), and they’re ready to make a run at the AFC playoffs.

In Pittsburgh, I think the young Drew Lock is challenged, and sadly, comes up short. Youth means energy, but it also means inexperience.

There’s something ironic about Tom Brady coming to Denver with his second team. Much as Peyton Manning’s career found a second life with these very Broncos, I think Brady will be revived in Tampa. Sadly, I don’t think the Broncos are ready to tangle with a team like this just yet.

I don’t have high hopes for Sam Darnold and company in 2020. Looking down the schedule, it’s hard to find hope for Adam Gase’s team. Even in Metlife stadium, I think the Broncos wipe out Gang Green.

I know Tom Brady isn’t there anymore, but there’s still something daunting about heading up to Foxboro to play Bill Belichick. That stadium haunts the nightmares of all AFC playoff hopefuls, and the greatest coach of all time loves scheming against young quarterbacks.

Chin up, Broncos fans! It gets better. Because while dramatically improved, the Miami Dolphins are still a very, very bad team. Even if I didn’t have heightened expectations for Denver’s offense, I feel like Vic Fangio’s defense could handle this one.

Drew Lock’s had some decent success so far in his career, but it pales in comparison to Patrick Mahomes. The evil genius, Andy Reid, and his unstoppable touchdown machine, aren’t afraid to go to Mile High.

The Atlanta Falcons are one of the strangest teams in the NFL. They really haven’t recovered from that Super Bowl loss, and despite having all the talent in the world on paper, they haven’t been able to put it together on the field lately.

But teams with this much upside are dangerous for squads like the Broncos, especially with Denver’s weak secondary. Side Note- How many receivers from Alabama are going to be in this game?

Drew Lock rides into the desert on a horse with no name and doesn’t have the best time. The Raiders high-flying offense is too much for Drew Lock to keep up with, and the Broncos head back home with another notch in the L column.

Fortunately, Justin Herbert and company are waiting for them, and the discrepancy in talent is obvious. I think the Broncos beat the Chargers down at Mile High.

Sorry Broncos fans, but the Orange and Blue are out of their league here against Drew Brees and company. The Saints are among the NFC’s elite contenders, and the Broncos just aren’t there yet.

If the Denver Broncos can’t pull off a win against Kansas City in Mile High, do you really think they can pull it off in Arrowhead?

The Panthers will be humming by this point, as Christian McCaffrey chases the Offensive Player of the Year he should’ve won the season before, and Teddy Bridgewater gets comfortable as the team’s starting quarterback. Traveling across the country, my hopes aren’t high for the Broncos.

Surprise! The Broncos end a three game skid by upsetting the eventual AFC East Champions! When push comes to shove, I just don’t trust Josh Allen and these Buffalo Bills. I think the Broncos are a cohesive enough unit this late in the season to make some real noise against a future playoff team.

Regardless of whether or not the government lets them in, there won’t be Chargers fans in this stadium anyway. I’ve never been a fan of Justin Herbert, and who knows what the Chargers will look like this late in the season. I think the Broncos really find themselves at the end of the year.

In a way, Denver’s 2020 season isn’t that different from 2019. They start awkwardly, find some momentum in the middle of the season, and ultimately beat a Raiders team that looked better on paper. Everyone talks about how Derek Carr struggles in Arrowhead, but let’s not pretend he enjoys himself at Mile High either.

So, not the best season for Drew Lock and company. They have their highs and lows, but ultimately, the west still belongs to Patrick Mahomes and the Kansas City Chiefs. This team has a lot of young talent, and they’ll get better with time, but 2020 was all about getting the reps in as they finish with a 7-9 record.