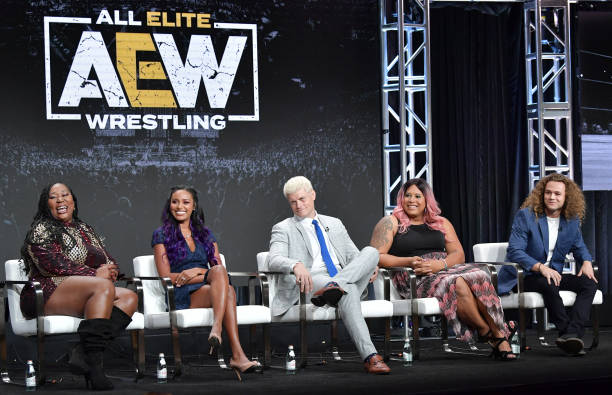 With their debut on AEW Dynamite two weeks ago, the wrestling world is thrilled to know that the “Revival” will finally face off with the Young Bucks. This is an interpromotional dream match that many thought would never happen. So it got me thinking… what other AEW/WWE dream matches would I like to see?

Disclaimer: I’m not including Kenny Omega vs. AJ Styles. Firstly, the crux of that feud is from NJPW, not AEW or WWE, and secondly, I don’t know that AJ is the same performer he was five years ago. It would be nice, but I prefer these five matches.

Maybe it’s the facepaint, maybe it’s the quiet, quirky charisma, or maybe it’s because any time either of these men step in a ring, they don’t seem to care if they die or not, but when I look at Darby Allin, I see a young Jeff Hardy.

I think this match is going to happen whenever Jeff’s contract with WWE expires, and I can’t wait. I feel like you could have these guys come out to the ring, make eye contact, and that would be build. Put these two in a ladder match, in a cage, on the moon, I’ll pay any price, I need it in my life.

A lot of people aren’t fond of Marko Stunt, and to an extent, I understand. But I’m actually a big fan, almost completely for the reason other people aren’t.

Marko Stunt is 5’2, 120 pounds. He’s very, very small for a professional wrestler. I like that because A. it shows everyone that if they want to be a pro wrestler, there’s a spot for them, and B. Hoooooly crap, can he make heels look massive.

When Lance Archer arrived in AEW, he did so by murdering Marko Stunt. He threw him around effortlessly, and instead of making Marko look small, it just made Archer look like a killer.

That’s why the sadist in me kinda wants to see Brock Lesnar do it. Lesnar’s known for his stiff, brutal squash matches, and I think Brock and Marko could put on the best squash match of all time.

I just wanna see Brock literally suplex Marko out of the ring.

The Miz vs. MJF

The Miz has leveled out in his later years as promoting his USA reality show has become a priority, but in his prime, he was an egotistical loudmouth that could get heat in any audience. His work with Maryse in the build-up to the John Cena/Nikki Bella WrestleMania match? Was wonderful.

In today’s wrestling world, there’s a new loudmouth with a punchable face, and his name is Maxwell Jacob Friedman. The promos alone in the build-up would be worth the price of admission.

If not a feud, a tag team? I kinda want Heel Miz & MJF vs. Babyface Jeff Hardy and Darby Allin. Call it MMMain Event vs. Freaks and Geeks?

The Young Bucks vs. The Uso’s

How great would this match be? Both teams are actual brothers, so they have the life-long chemistry that can’t be replicated, and neither team is afraid to take big risks in the ring.

I think this match would be an absolute blast to watch, and it breaks my heart that we probably won’t ever see it.

It was this or The Elite vs. The New Day, but for match quality, I took the tag team bout. Plus, we did kinda see the Elite and the New Day face off, even if it was just in Street Fighter.

TYB vs. Uso Drinking Game: Take a shot for every superkick. Don’t sue me when that lands you in the hospital.

The Inner Circle vs. The Undisputed Era

For symmetry, Hager would have to sit out, which is fine, because he’s the only real heavyweight in the bunch. He could be the heater and help interfere with the set-up and UE would inevitably be the fan’s babyface team.

Who wouldn’t want to see Strong vs. Sammy? LAX vs. ReDragon? Did you know that Cole got “Baybay” from Jericho? There are so many levels and it would be a blast to watch.

And that’s our list! Who did we forget? Which WWE/AEW dream matches would you like to see? Let us know in the comments down below.