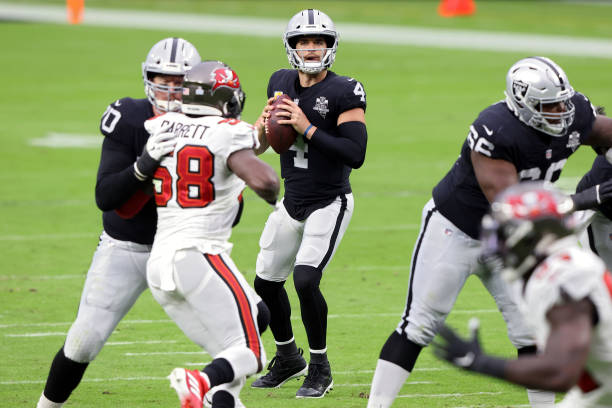 Over the last few years, the Derek Carr debate has been a vicious one. There are those that call him a darkhorse MVP candidate every season, those who say he isn’t as good as Gardner Minshew, and the rest of us, somewhere in the middle. The Raiders haven’t been very good, and as any quarterback will tell you, that means number four has received the brunt of the blame.

Here in 2020, the Las Vegas Raiders sit at a crossroads, wearing the 3-3 record Carr insists the team has earned. Nobody in the NFL has an easier remaining schedule than the Silver and Black, but the same was true last year and we saw how that turned out.

Regardless of how the rest of the season goes, Carr has done enough to silence his critics so far.

There’s been a preseason tradition in Raider Nation for the last couple of years. The Raiders build a roster that “should” be able to compete, and the Derek Carr hype train gets going. 2018 saw offensive genius Jon Gruden arrive, promising a MVP-type season for Carr after an ugly 2017. 2019 gave Carr a real number one receiver, Antonio Brown, to open up the offense after throwing to Marcel Ateman the year before.

We always hear these soundbites about how much Carr has improved, and how now that things have changed, he’ll be out to silence his doubters. Bleacher Report’s Moe Moton created the label of “Clapback Carr” for this occasion. Sadly, things haven’t always worked out that way. The Raiders were in shambles in 2018, Brown never took a snap in Oakland, and Carr has failed to bring the Raiders back to prominence.

Before anyone says anything, yes, I know, Derek could go deep more often. I completely agree. I also think he could be targeting his receivers more often. The Las Vegas Raiders are dead last in targets for wide receivers this season, and that means two of the team’s more prominent rookies aren’t getting enough touches.

I will also admit that Carr has lost too many fumbles this year. Carr’s four fumbles are tied for the lead league, and while a couple can be attributed to bad protection, there’s no question that he needs to take care of the ball when he’s in the pocket as well, lest anyone dig up a draft report from seven years ago where they said he had small hands.

But honestly, anyone that brings up these points to criticize Carr this year is nitpicking. Because while Josh Jacobs has been flummoxed a few times, and Darren Waller isn’t always available, Derek Carr has played some pretty god damn good football this year.

Sure, Carr doesn’t go vertical as often as I’d like (the Raiders are 24th in intended air yards per attempt), but at least now, with Henry Ruggs III and surprisingly, Nelson Agholor, the threat is real, as opposed to years past where it felt like he wouldn’t extend the play or stretch the field.

Carr’s 287.7 yards per game is seventh in the NFL (min 200 attempts), and his 13 touchdown passes are ninth in the league, despite the fact that five of the men ahead of him have played one more game. I don’t necessarily subscribe to quarterback ratings, but only league MVP candidates Russell Wilson (119.5), and Aaron Rodgers (113.4), rate higher than Carr this year (112.8).

Setting a pace is nice, but it’s hardly concrete evidence in an argument. A player could completely destroy their pace by playing exceptionally well or poorly. It’s rare that a small sample size proves to be accurate in the long run. But it does provide a good metric for determining a player’s success so far!

After six games, Carr is completing 72% of his passes for an average game of 287 yards, two scores, and less than an interception. That means he’s on pace for 4,603 yards, 35 touchdowns, and only five interceptions. That would mean Carr posted career highs in completion percentage, yardage, and touchdowns, with a career low in interceptions. Those are MVP numbers.

And it’s not like those were in gimme blowout games or anything. In fact, Carr’s had a bit of an uphill start to 2020.

A Rough First Half

The Raiders haven’t played a team with a losing record yet this year. The NFL has only eight division champions, and the Raiders have played the teams leading the AFC West, NFC South, and AFC East in half of their games. The worst team they’ve played, the Carolina Panthers, are also 3-3, and they’ve done that without their best player, Christian McCaffrey, who was active when they played the Raiders.

Speaking of missing their best players, the Raiders have had some inconvenient absences that might’ve buried other Silver and Black squads. The offensive line has played without Richie Incognito, Trent Brown, and Gabe Jackson due to various injuries, illnesses, and [questionable] ejections. The top three receivers on the depth chart, Tyrell Williams, Henry Ruggs III, and Bryan Edwards, haven’t been on the field much, with injuries keeping Williams off the field completely, limiting Edwards to three games, and with Ruggs making his return against Kansas City two weeks ago.

These are excuses, to be sure, but I’m not making them for the team, just providing context. Injuries have been brutal for most teams this year, and relatively speaking, the Raiders have stayed pretty healthy. I’m only drawing attention to the fact that the Raiders are still .500 and Carr has played this well despite setbacks that may have buried him in other years.

Derek Carr’s worst game in 2020 so far was definitely against the New England Patriots in week three. The team lost by 16 points, and Carr lost two fumbles. It’s not hard to connect those dots.

Except, despite missing starting right tackle, Trent Brown, as well as first round pick, Henry Ruggs III, Carr completed 24 of 32 passes for 261 yards and two touchdowns. Not to mention, an awkward tackle took Bryan Edwards Jr. out of the game as well.

On the road, with a depleted team, Carr still managed to have a pretty good game. And it wasn’t like Carr was responsible for the 250 rushing yards the Patriots offense put up. Sure, he needs to be better at holding onto the ball, but if you’re assigning blame, maybe take a closer look at the coach that allowed someone named Rex Burkhead to score three times.

Everyone jumped overboard after the Raiders let a close, horribly officiating Buccaneers game get away from them, but the biggest win of Derek Carr’s career was literally weeks ago.

The biggest criticism of Carr until literally three weeks ago was that he couldn’t beat Kansas City in Kansas City. Against the Chiefs in Arrowhead, Carr had never sniffed a win and his numbers were atrocious. He was always good for a turnover, points were never promised, and they usually left with a double digit loss.

But this year? Different story.

After a pick that was either a bad throw or a bad route, Carr came alive, completing 17 of 25 passes for 276 yards and three scores. At one point, the Raiders were up 16 against the then-undefeated reigning Super Bowl Champions. In a game where the Raiders needed Carr to be perfect… he basically was.

People are still going to nitpick, and I certainly groan every time the Raiders check down on third and long, but I don’t see how anyone blames Derek Carr for the team’s three losses this year. I’ve never been one to make excuses for Carr, but let’s look at the big picture.

The defense sucks, the starting offensive line hasn’t played together yet, and he’s been making it work despite the limited availability of his new weapons. The run game is hit or miss, and I’ve definitely got some questions about Jon Gruden’s playcalling, but despite that, Carr is making it work.

Maybe next spring, for the first time since Jon Gruden returned, we won’t have to endure quarterback rumors. Maybe Marcus Mariota can hit free agency and seek starting time somewhere else. And maybe, just maybe, the Raiders will draft a linebacker and field a respectable defense in 2021.

I won’t get ahead of myself.